Surface Measurement Systems' Managing Director, Professor Daryl Williams, has been named the winner of the Royal Society of Chemistry’s Chemistry World Entrepreneur of the Year. 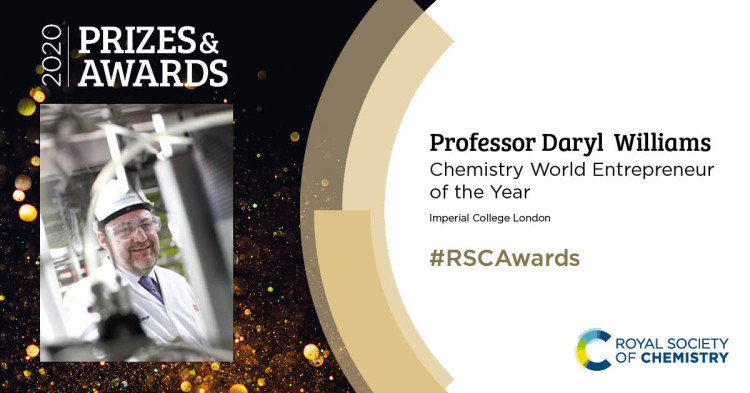 Based at Imperial College London and Surface Measurement Systems Limited, Professor Williams won the award for the pioneering invention of the Dynamic Vapour Sorption (DVS) instrument, which has transformed research laboratory practice worldwide.

After receiving the award, Professor Williams said: “It is an honour that the RSC should acknowledge the commercial success achieved by me and by the staff at Surface Measurement Systems over the past 20 years. I am especially thankful that the quiet achievement of the chemists, scientists, engineers and other professionals at Surface Measurement Systems who have provided world leading innovation and science is being celebrated by the RSC, whilst at the same time shining a light on the importance of entrepreneurial efforts of chemists and engineers which make our world a better place.”

Professor Williams, who is from Melbourne, Australia, is founder and Managing Director of Surface Measurement Systems, and a Professor of Particle Science at Imperial College. In recognition of his achievements, he also receives a trophy. His work focuses on the negative impact of humidity on materials, which becomes much more serious in the case of tablets and pills, affecting shelf life and performance. To combat this, Professor Williams invented an instrument to test moisture sensitivity of drug powders, tablets and pills – the DVS. The instrument is now used by every pharmaceutical company in the world, and is an important tool accelerating the development of new medicines.

Dr Helen Pain, acting chief executive of the Royal Society of Chemistry said: “We live in an era of tremendous global challenges, with the need for science recognized now more so than ever – so it is important to recognize those behind the scenes who are making significant contributions towards improving the world we live in. It is our honour and privilege to do that with these awards, which recognize exceptional scientific achievement.

“The global chemical sciences community is one that covers many different specialisms, from health and climate change to product development, sustainable transport, and everything in between. In recognizing the work of Professor Williams, we are also recognizing the important contribution this incredible network of scientists makes to improving our lives every day.”

The Royal Society of Chemistry’s Prizes and Awards are awarded in recognition of originality and impact of research, or for each winner’s contribution to the chemical sciences industry or education. They also acknowledge the importance of teamwork across the chemical sciences, as well as the abilities of individuals to develop successful collaborations.

Of those to have won a Royal Society of Chemistry Award, an illustrious list of 50 have gone on to win Nobel Prizes for their pioneering work, including 2016 Nobel laureates Jean-Pierre Sauvage, Fraser Stoddart and Ben Feringa. Last year, the Royal Society of Chemistry announced it is reviewing its recognition mechanisms. Details of how the awards structure will be changed – to ensure that the way excellence is recognized is fit for today’s needs – will be announced later this year.